I think if our wild bees could talk, the two things they would ask us to do is to let our hedgerows flower and to let more grassy areas bloom. If we did this across the island it would provide a range of native wildflowers throughout the life cycle of our wild bees and other insects and give them a fighting chance for the future. 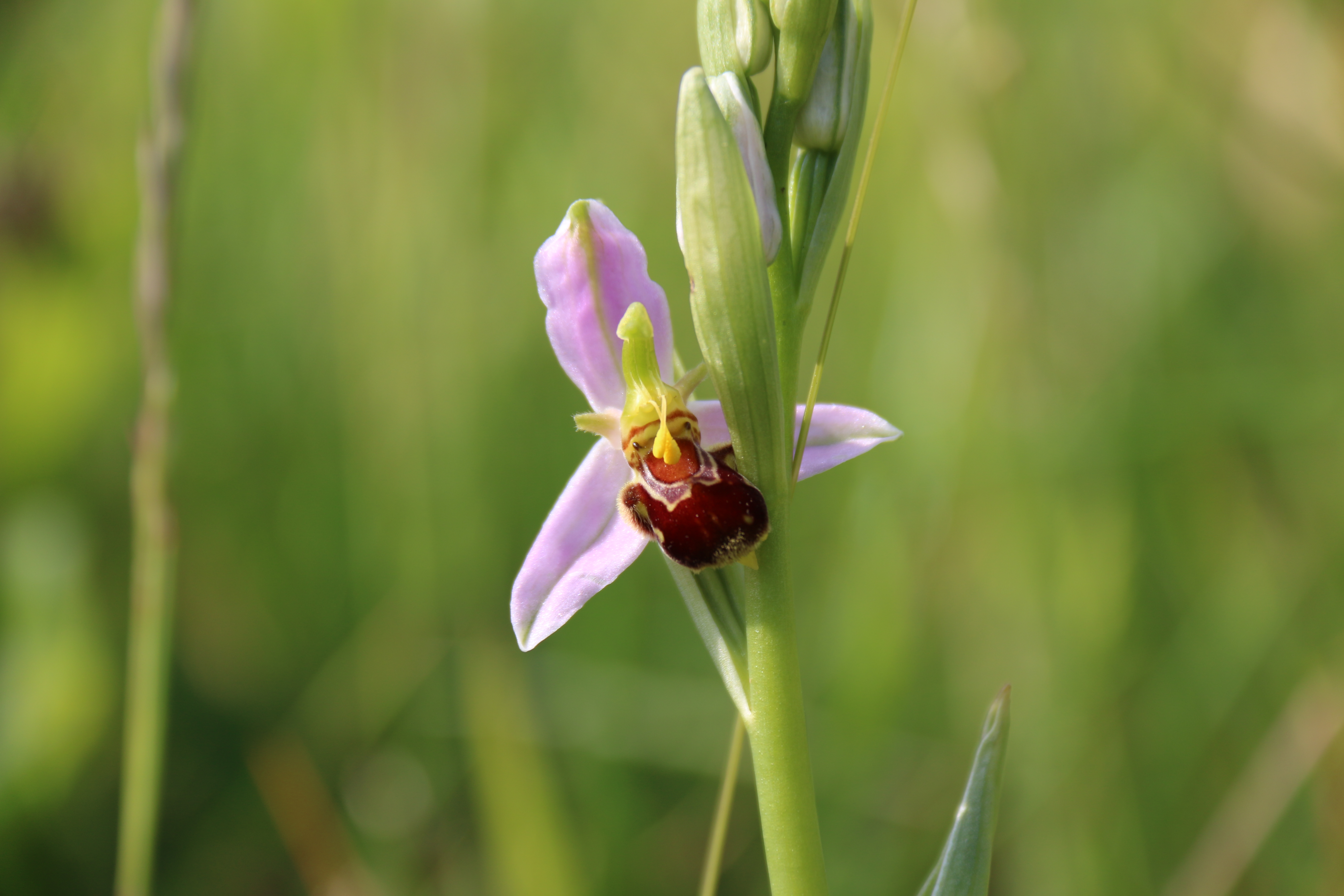 Over recent decades, we’ve fallen into a pattern of managing our private and public grass like golf greens. To humans, neatly manicured grass might look tidy, but to our wildlife it must look a bit like the apocalypse! Shortly mown grass doesn’t support biodiversity – longer grass supports a myriad! Thankfully it’s easy to reverse things – you just cut less often to give the slower growing wildflowers a chance to flower amongst the grass. It’ll probably be the pollen and nectar-rich Clovers, Bird’s-foot-trefoil, Self-heal and Knapweed that bees love, but it might also be something even more special!

To humans, neatly manicured grass might look tidy,
but to our wildlife it must look a bit like the apocalypse!
Shortly mown grass doesn’t support biodiversity – longer grass supports a myriad!

The first time I ever saw a Bee Orchid was on a Botany field trip to the Burren as an undergraduate. It was the highlight of the whole trip. Ophrys apifera is a stunning wildflower and an amazing example of plant-pollinator coevolution. The plant emits a scent that resembles a female solitary bee. The flowers mimic the female bees so well, that amorous males fly in to try to mate with it and end up pollinating the flower. Sadly, the right bee species (Eucera longicornis) doesn’t live here, so it is self-pollinated in Ireland. Bee Orchids also rely upon a symbiotic relationship with mycorrhizal fungi, to extract sufficient nutrient from the soil they grow in. Like all orchids, it can’t grow without its fungus. This makes it vulnerable to chemicals, particularly fungicides, but also other chemical applications which could reduce the prevalence of fungi in the soil.

You’d imagine it would be difficult to help such an interesting and complex component of our biodiversity. It’s not – we just need to give it space to flourish and stop tidying it out of our landscape. In the National Biodiversity Data Centre, we typically receive sightings from around 20 sites each year; some records refer to a solitary flower, others to a few dozen flowers at a time. However, that has changed since 2016 when we started receiving sightings from an average of more than 60 sites annually. It’s hard to identify a definite link, but equally hard not to assume that it has something to do with the reduced mowing that is encouraged through the All-Ireland Pollinator Plan. If Bee Orchids are increasing, so are lots and lots of other wildflowers that help pollinators. Together we are making a difference!

This June in Midleton, an astonishing 363 Bee Orchids have appeared within unmown roadside verges in the town. This is the very first year of their reduced mowing regime as part of the town’s Pollinator Plan. Perhaps not in such spectacular numbers, but this year, new Bee Orchid records are popping up all over Ireland as a result of reduced mowing due to Covid-19. Those little seeds have been waiting in the soil for decades to get a chance to pop up and show us their beauty. Maybe we should heed what they’re telling us – it’s easy to help our biodiversity recover if we choose to.

It’s not just Bee Orchids; on an unmown grassy verge in a Portlaoise housing estate, a rare Green-winged Orchid appeared nearly 120 years after it was previously found in the general area! (https://pollinators.ie/does-the-lockdown-bring-any-silver-linings/) Thanks to reduced mowing and more Dandelions in 2020, we have had more solitary bee records submitted than ever before! Don’t Mow, Let it Grow – it really does make a difference!

The National Biodiversity Data Centre has written to the Chief Executives of all councils in the Republic of Ireland to highlight the positive impact of reduced mowing on public land on our biodiversity in 2020.

To read more about Midleton’s explosion of Bee Orchids see: 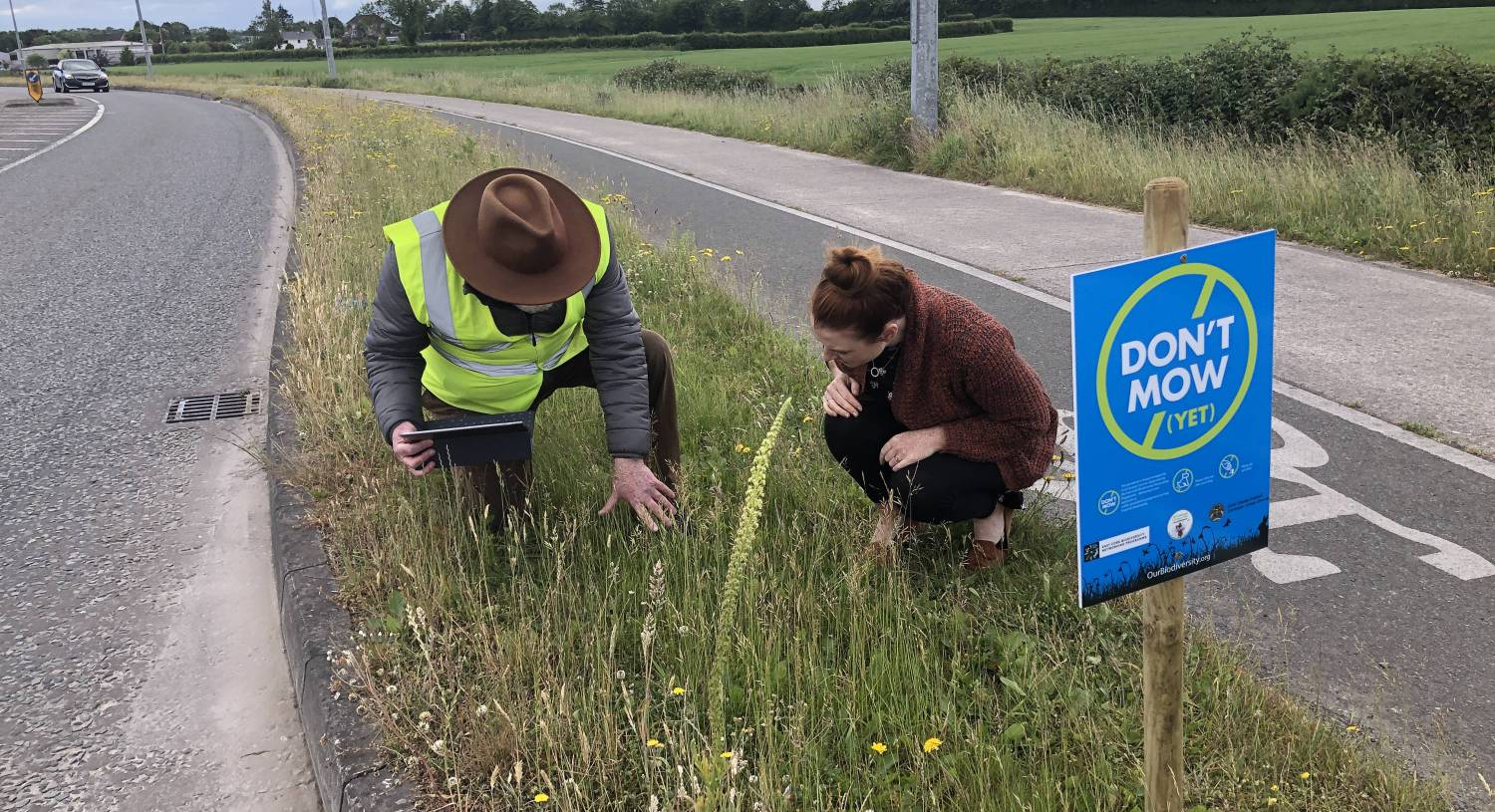 Counting 363 bee orchids on verges in Midleton in East Cork where a managed scheme to support biodiversity has been in operation under the All-Ireland Pollinator Plan for just one year, with direction from Janette Kenny, Executive Engineer, Cork County Council.