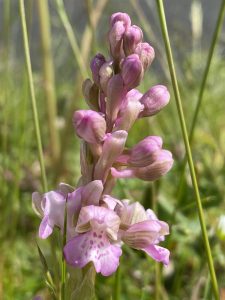 Green-winged Orchid (Anacamptis morio), a rare wildflower species has recently appeared on a grassy verge in a Portlaoise housing estate, which is usually mown regularly.

Does the national lockdown have any silver linings? Well, one was seeing the motorway verges covered in Dandelions and Cowslips on a recent trip to Newbridge. The delay in routine mowing along the motorways has allowed these wildflowers to flourish providing stunning carpets of yellow – a joy to both the human eye and our hungry pollinator species. Plantlife, a conservation organisation in the UK, also recently highlighted this unintended positive consequence of the Covid19 crisis for biodiversity.

A rare wildflower species has also recently appeared on a grassy verge in a Portlaoise housing estate. Green-winged Orchid (Anacamptis morio) was recently recorded by Brian Gaynor, the Laois-Offaly IWT chairperson and environmental consultant. This orchid is particularly rare, only being recorded at three other locations in Co. Laois in recent times. It is a species that is extremely particular about where it will grow. It likes old unimproved calcareous grasslands, i.e. areas of grass that have never been fertilised and have a strong limestone influence. The agricultural Rye-grass pastures that dominate Ireland’s rural landscape will never feature these orchids.

Laois is criss-crossed with Eskers – the large ridges of sand and stone left behind by retreating glaciers at the end of the last Ice Age. These landscape features have long been mined for their gravel and many have disappeared as a consequence, but some prominent ones remain such as at the Ridge graveyard and the tree-covered ridge behind the People’s Park, both in Portlaoise. Both are remnants of a very prominent feature known as the Ridge of Maryborough and its lime-rich grassland and woodland habitats have long attracted scientists. Ireland’s most famous naturalist Robert Lloyd Praeger recorded Green-winged Orchids ‘in meadows around Maryborough’ in 1896. What is interesting is that it has now appeared in a verge in a relatively new housing estate (15 years old), nearly 120 years after it was previously found in the general Portlaoise area. Perhaps the orchid has been there for several years and went unnoticed, although Brian thinks this unlikely. A more likely explanation is the delay in grass maintenance around the estate allowing the plant to flower for the first time and then be spotted. Another interesting feature of these beautiful plants, as pointed out by Dr Maria Long, Grassland Ecologist with the National Parks & Wildlife Service (NPWS), is that they can only grow where they have the correct mycorrhizal associations. Mycorrhizae are species of fungi specially adapted to grow in association with particular species in a symbiotic (mutually beneficial) relationship. So, if the right mycorrhizae aren’t present then the Green-winged orchid won’t grow.  Which makes the appearance of this orchid on the edge of Portlaoise in the middle of a pandemic even more miraculous! 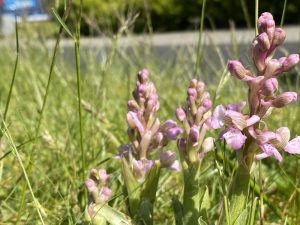 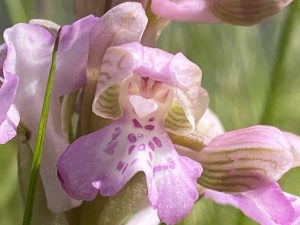 The appearance of this species, and other wildflower species, around Portlaoise and other towns in Laois also reflects positively on the work of the various Tidy Towns groups and residents’ associations. These groups are increasingly focusing on enhancing biodiversity and taking on projects to enhance wildflowers.  One easy way to do this is applying the ‘don’t mow, let it grow!’ principle. This does not mean letting grassland grow completely wild, but rather letting grassy areas like verges or selected green areas grow for a longer period to allow wildflowers to flower and seed, before being mown or cut. Many groups are allowing the wildflowers and grasses to bloom on the verges of approach roads to their towns while keeping the roadside edge neatly trimmed, thereby retaining the neatness factor whilst also allowing the beauty of our wildflower verges to be displayed. This is great for pollinating insects like Bumblebees, who need the grassy bases of hedges and walls for hibernation and nesting. Sometimes this just means taking a lighter touch in maintenance. 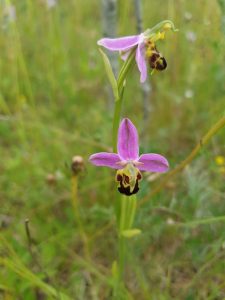 Portlaoise Tidy Towns, chaired by local businessman Gerry Browne, have adopted this approach all around the town as part of their new ‘Town in a Garden’ ethos as evidenced by the new wildflower verges and pollinator-friendly planting projects. Such projects include their three newly established community orchards, the pollinator-friendly landscaping being implemented along the inner orbital road, and their move away from annual bedding plants to more biodiversity-friendly perennials. Kilminchy and Heathfield housing estates, with the support of Portlaoise Tidy Towns, are allowing some of their green spaces to develop as wildflower meadows alongside new hedgerow and tree planting. This highlights the potential biodiversity value of the greater Portlaoise area, where there are plenty of small pockets of higher biodiversity and other rare, beautiful plants like Bee orchids, Blue Fleabane and Nettle-leaved Bell Flower have been recorded recently.

The local Botanical Society of Britain and Ireland (BSBI) recorders for Laois, Dr Mark McCorry and Dr Fiona Mac Gowan would encourage people to keep an eye out for Green-winged Orchid in Portlaoise and other locations and contact the BSBI or the National Biodiversity Data Centre if they see it at other locations.  If it has popped up here in a grassy verge in Portlaoise, it is likely to appear in other unusual locations.