The Great Yellow Bumblebee (Bombus distinguendus; GYBB) is the rarest of our true bumblebees in Ireland, and is classified as Endangered on the Irish Red List. The only remaining population is now on the Mullet Peninsula in Co. Mayo. On August 15th and 16th, five PhD and postdoctoral researchers from my group at UCD joined me for a bumblebee ‘blitz’ to survey for Great Yellow Bumblebee on the Mullet peninsula, where there is a known population, but also at nearby sites off the peninsula that have suitable habitat, but few or no records of the species.

On August 15th, we spend time on the peninsula around Cross Lake and at Termoncarragh, where we saw good numbers of both males and workers of the species. On August 16th, we divided into groups and visited all the machair grassland areas south of Belmullet as far as Doohoma, many of which had no previous records of the Great Yellow Bumblebee. We chose to focus on machair areas as potentially the most suitable habitat, as many meadows have already been cut by this time of year. 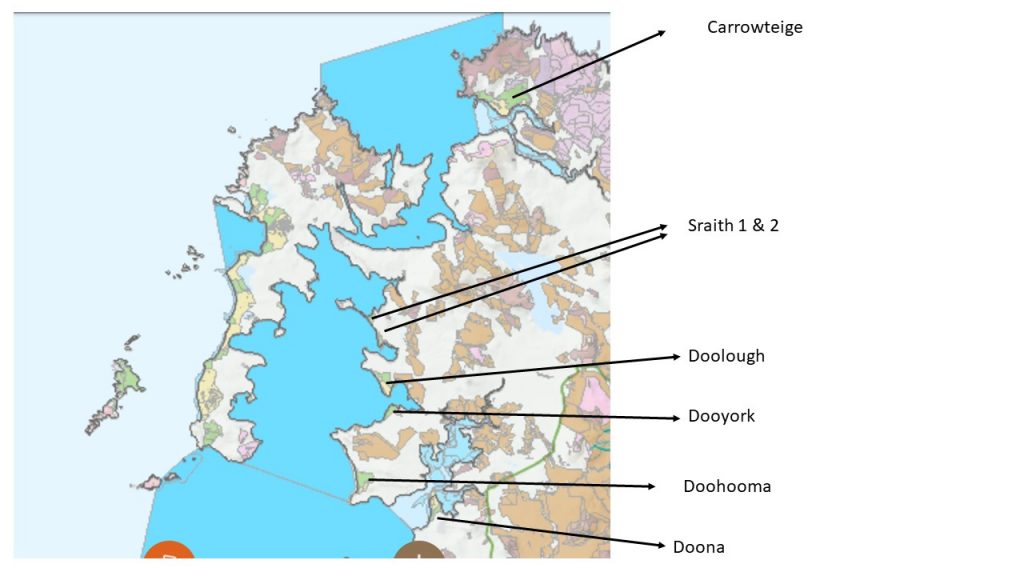 Sites with Machair habitat (shown in green) around Belmullet.
All labelled mainland sites were visited as part of this ‘blitz’ except Carrowteige and Doona.

We found the Great Yellow Bumblebee at four of the five mainland sites visited, confirming that there is a population of the species on the mainland. As we didn’t carry out systematic surveys, we can only confirm its presence rather than actual numbers or densities. However, we did see workers, males and even one queen, which suggests there is an active and reproducing population. We noted the species foraging primarily on Common Knapweed (Centaurea nigra), but also on Harebells (Campanula rotundifolia) and Ragwort (Senecio jacobaea). 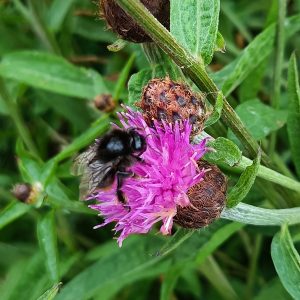 The next most threatened true bumblebee on our national Bumblebee Red List that is known from the area is the Red-tailed Carder Bee (Bombus ruderarius). We saw this species on the peninsula at Cross Lake and Termoncarragh, but didn’t pick it up on any of the mainland sites. We also noted the following bees commonly throughout our surveys: Bombus muscorum, Bombus pascuorum, Bombus lapidarius, Bombus hortorum, Bombus lucorum agg. and Bombus terrestris (queen; all records have been submitted to the National Biodiversity Data Centre). Interestingly, we did not spot any honeybees in any of our surveys.

Thanks to Alison O’Reilly, Katherine Burns, Linzi Thompson, Tara Dirilgen, Sarah MacQueen, Karl Sweeney (and Nora Sweeney) for joining the blitz and visiting the sites. Michelle Larkin, National Biodiversity Data Centre; Marcela Diaz, UCD; Ross Kilduff, DAFM; and Lisa Macken also joined us on Sunday. We hope that these records will also be useful for the new Great Yellow Bumblebee EIP project, recently awarded to a project team led by Belmullet Tidy Towns and Mayo County Council, which will work with local farmers to design an agri-environment scheme to put in measures to benefit the bee and wider biodiversity.

Records of B. distinguendus from sites surveyed on August 16th 2021 along the mainland coast south of Belmullet:

*Sites were only walked for a short period of time and not in a systematic way, and so these should be interpreted as a guide only.

+In all sites we targeted the machair/dune areas, but also walked some roadsides etc. All records and their exact locations have been submitted to the National Biodiversity Data Centre 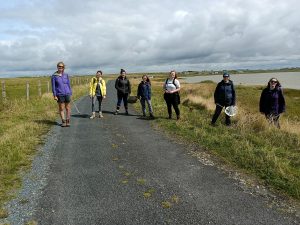 Examples of suitable habitat for the Great Yellow Bumblebee encountered during the blitz: 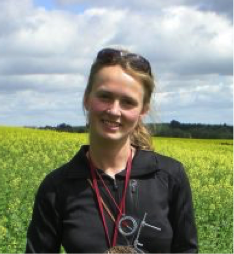 Dara is a Lecturer in Applied Entomology in the School of Agriculture and Food Science, and Earth Institute, at UCD.

To find out more about the Great Yellow Bumblebee, see: 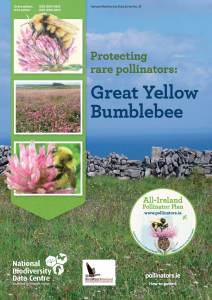 Our latest blog is a postcard from Whitechurch Church of Ireland Parish in Rathfarnham, Dublin, who used our guideline 'Faith Communities: Actions to Help Pollinators' to make their grounds more pollinator-friendly.