Following publication of the mid-term review of the All-Ireland Pollinator Plan 2015-2020, Dr Úna Fitzpatrick reflects on some of the achievements and challenges faced. 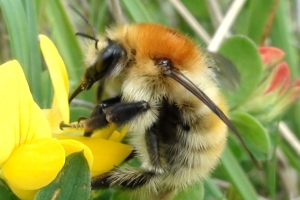 I haven’t worked a day in my life.

– If that was the case before, it has certainly been true since Jane Stout and I began trying to develop a strategy to help bees and other pollinators back in 2014. The insects themselves have always been a joy to work on, but what’s been unexpected are the thousands of people, from all walks of life, who have embraced the All-Ireland Pollinator Plan 2015-2020. They have taught me lots, and many have been an inspiration and a pleasure to get to know.

When I was a child, each summer would be marked by dozens of tiny volcanic mounds of soil appearing in the grass in our garden. I now know they were mining solitary bees. My little sister and her friends had a ‘bumblebee club’ and would spend hours putting the poor put-upon insects into jam jars and letting them go again. Little did I suspect what a large part bees would play in my adult life.

We’ve just published a mid-term review of the All-Ireland Pollinator Plan 2015-2020 and I’ve been trying to step back and assess how things are going. The Plan was developed voluntarily, from the ground up, and identified 81 actions to make the island more pollinator-friendly again. From the start, the support has been overwhelming, and currently the Plan has attracted 90 non-governmental and non-governmental partner organisations. A 16-member steering group provide oversight, with implementation coordinated by the National Biodiversity Data Centre. I have to acknowledge the vision of Bord Bia and the Heritage Council, who, when they saw the potential of the initiative back in 2016, agreed to come together to fund a Project Officer position to support implementation.

The Pollinator Plan has five objectives, but at its core it’s about looking at our whole landscape (farmland, public land and private land) and trying to make it a place where pollinators can survive and thrive. It is a call to action, to everyone, but you can’t expect people to get involved unless you clearly explain what it is you are asking them to do. Therefore, a core part of the initial implementation has been publishing evidence-based guidelines for different sectors, which explain simple actions they can take to help. These guidelines are freely available (at pollinators.ie) for farmland, councils, local communities, faith communities, gardens and businesses, with more in train.

Over the last three years, we have seen many successes. Where we have managed to make connections, the support from the public has been enormous. A recent nationally representative poll found that 88% of people want the Irish government to do more to help bees. It’s hard to get 88% of people to agree on anything and shows how much people do care!

The All-Ireland element has been a huge advantage in that we’ve been able to share experiences and ideas across both jurisdictions and work together under a common framework. Responsibility for the 81 actions are shared across the supporting organisations and they really are happening.

We have been building strong relationships with the farming community and have recently been awarded funding to trial a five-year project in County Kildare that will show how all farms, regardless of type or intensity level, can become more pollinator friendly.

Councils across the island are changing the way that public land is managed. Over the last three years, 140 local communities have become more pollinator friendly and have entered the special Pollinator Award in the Tidy Towns competition. Our most threatened bee, the Great Yellow Bumblebee, has been adopted by Mayo County Council. More than 80 businesses have become supporters of the Plan and agreed to take actions to help. Thousands of gardens are becoming pollinator friendly.

More and more research on pollinators has been happening in Irish universities, and more and more people are engaging with the National Biodiversity Data Centre and learning how to identify bees and hoverflies and collect data to track changes. We’ve been fortunate enough to be able to link with numerous existing networks and initiatives – from Green Schools to Creative Ireland. Three years in is too soon to see changes in pollinator populations themselves, but in terms of actions that have been taken to help them, we are definitely going in the right direction.

The All-Ireland Pollinator Plan is a complex project to manage but I like that kind of thing, so that has been no hardship. What’s been most difficult for me personally, is seeing interest and the potential for further growth, but not being able to take advantage of it fully due to limited resources. Given our very limited manpower, we constantly have to prioritise some aims, while parking other elements – in the hope that the interest is still there when we can get round to delayed actions. One such decision was prioritising our support of Councils in taking actions over developing guidelines for Transport Authorities, and we can only hope they are still willing to engage when we finally get to them in 2019.

What has also been difficult is the lack of security in the Project Officer position. The funding for this position has been agreed on a 12-month basis, which does not lend itself to long-term planning and continuity across a five-year project. It is also unfair to ask of anyone, never mind the very skilled officers we’ve managed to attract.

I’m also incredibly conscious that across all sectors there are individuals who champion the Pollinator Plan in an entirely voluntary capacity. We wouldn’t have achieved what we have without those people and I know that we can never thank or acknowledge them sufficiently.  We’ve also been blessed by luck. Many times, people have crossed paths with the Plan at a time when we’ve needed them most – from the Steering Group members, to the project officers, to our champions, and for that we are very grateful. When we started the All-Ireland Pollinator Plan many people said we were mad. Bottom-up initiatives can sometimes be seen as disruptive. Of course they may not work, but perhaps where we know problems exist, we should all be willing to be more disruptive from time to time.

I know people sometimes wonder if I’m overreacting, both when I talk about bee declines and on the level of support we have been experiencing for the All-Ireland Pollinator Plan.  I’m not. One third of our 98 wild bee species are threatened with extinction from the island and our common bumblebee species have experienced a 14.2% decline in abundance in the last five years. Rare species are disappearing through habitat loss, and our common species are struggling because there simply isn’t enough food for them across our landscape. Pollinators are in enormous difficulties, but we don’t have to accept that. We can change their fate. It’s not about feeding tired bees a spoonful of sugar water. Pollinators need us to move away from seeing the landscape as purely a human space that should be kept neat and tidy. It’s not about letting things go wild, but we do need to let nature back in or we risk losing its vital free services. It’s about retaining healthy hedgerows on farms and allowing them to flower; not using herbicides so freely to tidy up our public spaces; planting more native flowering trees; not cutting grass so often – so that pollen-rich Dandelion and Clover can grow and provide food, and planting pollen and nectar-rich flowers in our parks and gardens.

More native flowers in our landscape means more pollinators and other insects. More flowers mean more fruits and seeds, and therefore more birds and mammals. More flowers also mean a more distinct, more colourful and more attractive environment for us to live in and for visitors to experience. In taking simple actions to help bees, we gain so much more!

Many years ago, I spent time studying plants on small remote islands in the South Pacific. To those people, the idea that we would have to consciously decide to protect nature is ludicrous. They live as part of it – the island and its shores are all they have. Responsibility is personal. We’ve lost that direct connection and, with it, a lot of personal responsibility; but this island, while much larger, is also all that we have.

I am an eternal optimist and live by the saying ‘better to move forward and stumble than sit still and grumble’. However, there is one thing that even I struggle with. I was a child in the 1980s. Back then, it was very easy to find bumblebees to put in jam jars and for many years the thing I was most scared of was going outside our back door at night because hundreds of moths would flit around the outside light above your head. To my children, a moth is something we find in the bathroom at night a few times in summer. To them, that’s their ‘normal’. So, too, is not having frogs jump into their wellies, not having hedgehogs in their garden or house martins nesting in the eve of their roof. They don’t know what has been lost already, so how can we expect them to feel the need to change things. I hate that we are the generation who guarded over the disappearance of our biodiversity. I hate that we’ve created a new normal where nature is rare rather than something we live with and as part of.

Bees have been around since the time of the dinosaurs. Let’s not be the generation that squanders this vital resource. Let’s take advantage of the public support to change things. Let’s get behind the current Pollinator Plan and let’s work to develop an even more ambitious one in 2021. Let’s not accept that ‘it’s too late’, and instead, work to ensure we leave our grandchildren a better environment than we’ve given to our children.

Download the Mid-term Review of the All-Ireland Pollinator Plan

Visit www.pollinators.ie and learn what you can do to help. 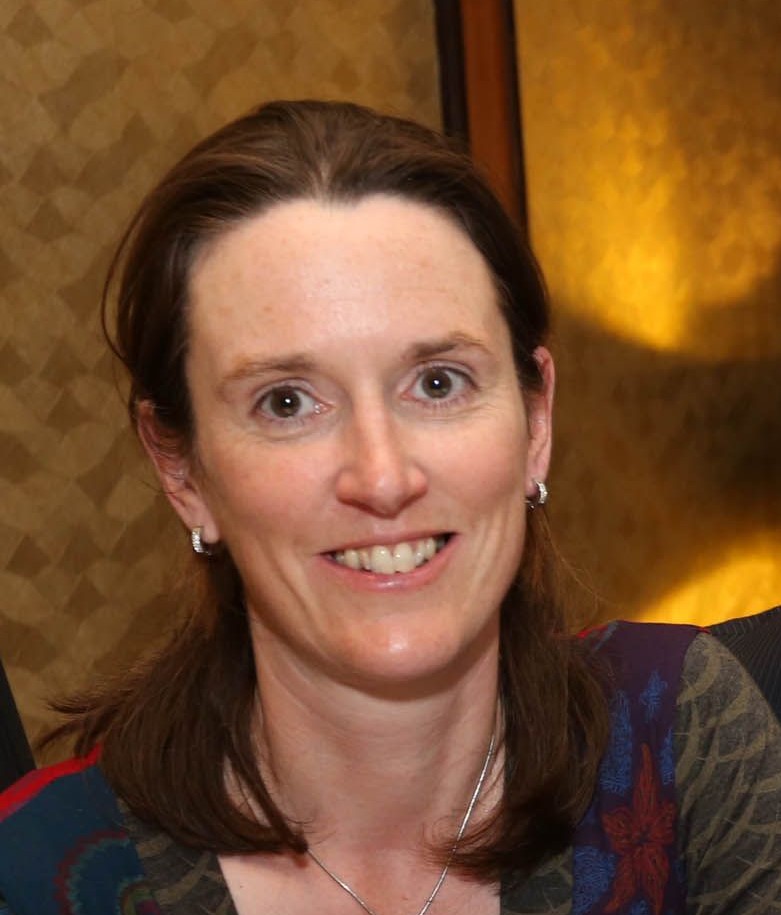 Dr Úna Fitzpatrick is co-founder and Project Coordinator of the All-Ireland Pollinator Plan and is a Senior Ecologist with the National Biodiversity Data Centre.