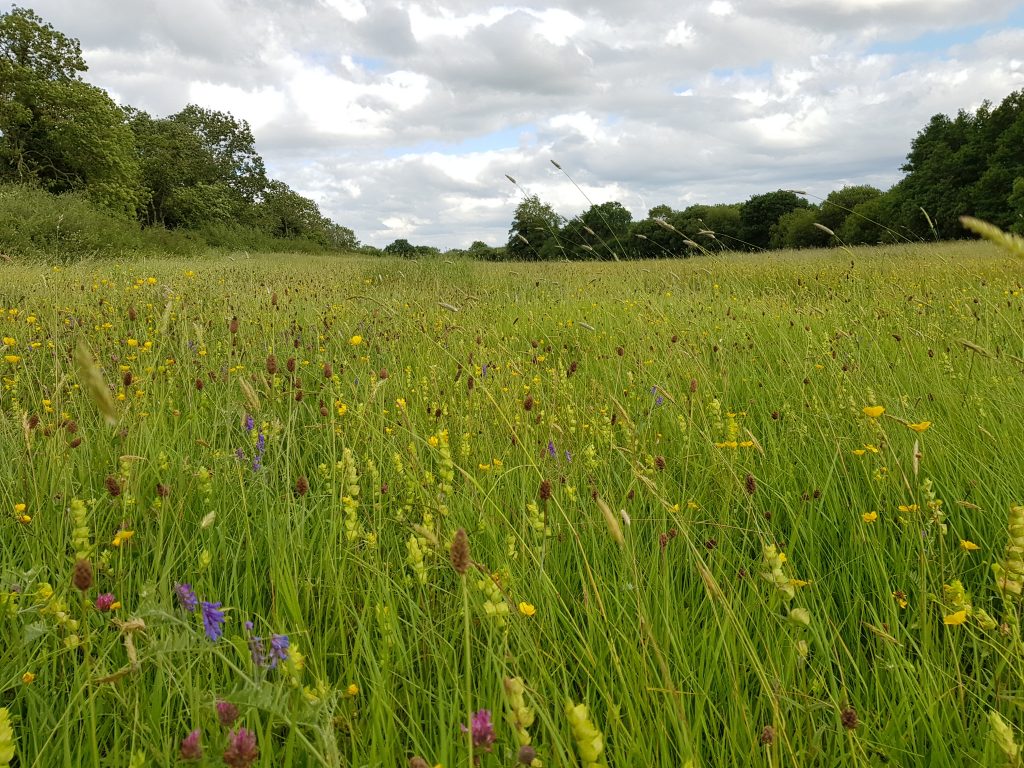 What is a meadow?

With a mixture of soft grasses and wildflowers reaching above your knees, a traditional farmer’s meadow is a field allowed to grow until it’s cut for hay in late summer. After the cattle and sheep graze the meadow for a few months, the hay is used to feed the cattle and sheep during winter.

Today, the term ‘meadow’ is also used to describe many different types of flower-rich grassy places, such as meadows in our gardens, parks and community places.

There are lots of reasons meadows matter, here’s just a few: 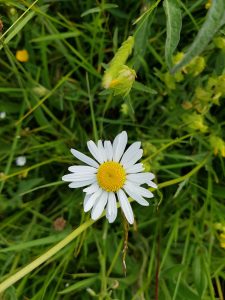 Try the Ox-eye daisy test for 6 minutes.
It’s even better if you’re in a meadow!

The 20th century saw a sharp decrease (97% in the UK) in the number and variety of traditional hay meadows across the Irish countryside. This was due to changes in agriculture policy and practice, particularly increased field drainage and herbicide use, ploughing and reseeding with vigorous grass for multiple silage crops each year.

Where are our meadows?

The National Parks and Wildlife Service commissioned an Irish semi-natural grasslands survey (2007-2012).  The six years of the survey resulted in the botanical survey and mapping of 1,192 grassland sites, covering 23,188.1 ha of Ireland. These meadows need to be valued, otherwise they remain at great risk of being lost. With most remaining meadows occurring in small fragments, they remain vulnerable to destruction. 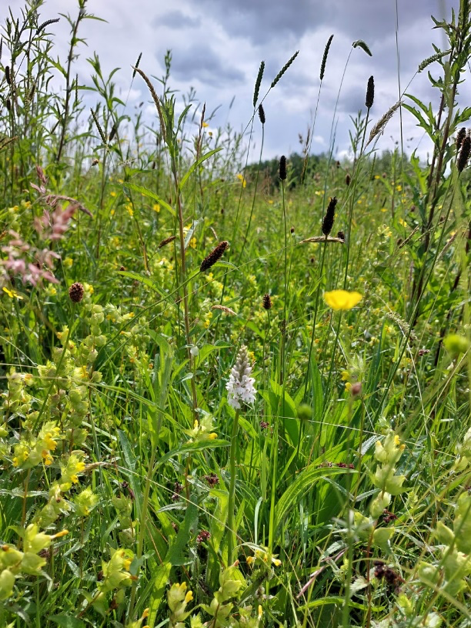 Are they at risk?

Interestingly, according to Plantlife1, a UK wild plant charity, the greatest risks to meadows are:

Plantlife Botantist, Dr Dines explained that any rewilding scenario should ideally deliver enough grazing and disturbance to support the many wildflower species. Plants may appear rooted to the spot but they are actually always on the move and thrive best when engaged in the wider hustle and bustle wrought by a degree of light management and grazing. Total abandonment can mean plant diversity actually declines as scrub (19% of UK land cover) and woodland (12% of UK land cover) develops. In our understandable rush to rewild some landscapes, we must ensure the remaining species-rich grassland and meadows are better protected, they will also benefit from restoration and new meadow creation, where suitable. They require sufficient levels of grazing and management to keep them viable.

In our understandable rush to rewild some landscapes,
we must ensure the remaining species-rich grassland and meadows
are better protected, they will also benefit from restoration
and new meadow creation, where suitable.

I rented a small meadow in Co. Antrim, which by chance had survived in an intensively farmed area. It is buzzing with pollinators and other insects.

I took my late father to see the meadow; he had farmed all of his life. I thought he would enjoy seeing it, with plants such as the Common Knapweed that he knew as ‘hard head’. His brow furrowed deeply and he looked worried as he scratched his head. He had serious concerns about how this field could feed livestock and not be a financial drain. Both of his concerns were well grounded in today’s farming landscape.

He had lived and worked through a period of great change in agriculture. He had embraced his first wee grey Fergie tractor, loved nothing more than to dig a new drain to sort out a wet field corner or remove a hedge to make a field bigger. Then later in life, he was delighted to get funding to plant and restore hedgerows. Perhaps he would also have found delight in the creation and management of a meadow, as long as it did not impact on his farm business.

This meadow has been given a temporary reprieve, it is hoped that the wider value of our wildflower meadows will be realised and that farmers can be supported to retain, restore and manage them, alongside their farming activities in the future.

As part of the All-Ireland Pollinator Plan, we’ll investigate the creation of a map of wildflower meadows. These precious meadows could be used as donor sites for wild flower seed collection and green hay exchange for local meadow restoration projects. It’s an exciting first step towards locating these unique meadows, properly valuing this important component of our natural heritage, and possibly creating more of these valuable habitats in the future. 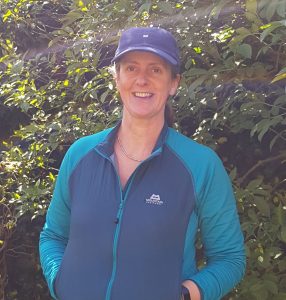 For information on species-rich grassland management see this excellent guide from Farming for Nature: https://www.farmingfornature.ie/resources/best-practice-guides/managing-species-rich-grasslands/

Exciting event planned by CIEEM to raise awareness of noctural pollinators. We thank them for their support! Join on the 8th December to hear more http://events.cieem.net/Events/EventPages/08122021000000ConsideringNocturnalPollinatorsCIEEMandtheAllIrelandPollinatorPlan.aspx

Fantastic range of recently published research on Irish pollinators. Their work helps create the evidence-base that the AIPP is built upon https://pollinators.ie/research/publications/ @JaneCStout @DaraStanley @JimCarolanMU

Delighted to have been part of this event earlier today talking about the AIPP. Local Authorities are carrying out so many fantastic actions for pollinators/nature!

Congratulations to Julianstown Community Garden, winner of the Community Garden category in the Green Flag for Parks pollinator award. Fantastic range of actions to make the Garden bee friendly!