Tom Butler, Chair of Ballincollig Tidy Towns, explains how they created a pollinator corridor through their community

Ballincollig is located on the western side of Cork and up until 2019 was part of the County of Cork. With a restructuring of the city boundary, Ballincollig has now become part of the City. Although it has a population of some 20,000, Ballincollig still retains its village feel. Over the past number of years, the Ballincollig Tidy Towns group have worked very closely with the local authority, resulting in very positive results.

Over the years, all planting projects have been carried out with the future in mind. Hundreds of trees were planted and as these are maturing, they are a very positive addition not only to the streetscape but also to the environment.

Ballincollig took part in Entente Florale in 2006 and its participation has had a hugely positive effect on how we do things and on the mindset in relation to biodiversity and sustainability. Since this 2006 competition, Ballincollig Tidy Towns have taken a new direction, working on changing the mindset of people, including Residents Associations, Local Authority Staff, Gardening Contractors, Businesses and even some of our Volunteers.

Every change takes time. However, we are now succeeding. We were extremely lucky that a local Garden Centre agreed to take over the replanting and maintaining of a very large roundabout at one entrance to Ballincollig, with the support of the local authority. When trees and roses on the Roundabout were severely damaged by a storm and disease, the Garden Centre changed the whole planting scheme to make it pollinator-friendly. All work was carried out using non-chemical environmentally-friendly products. We believe it was Ireland’s very first pollinator-friendly roundabout. The noticeable effect was almost immediate. The bees soon found this large feeding area and the place became a ‘hive’ of activity.

Ballincollig Tidy Towns held a public information evening
on pollinators and all that can be done to make a difference.
‘Ballincollig Spray Free Town’ initiative was launched at this event,
as was Ballincollig’s Pollinator Corridor.

Ballincollig Tidy Towns held a public information evening on pollinators and all that can be done to make a difference. ‘Ballincollig Spray Free Town’ initiative was launched at this event, as was Ballincollig’s Pollinator Corridor.

We did meet with some resistance from staff in the new Local Authority with regard to our Spray Free Initiative. Thankfully, we are confident that this has now been resolved and given the amazing show of dandelions in green areas throughout Ballincollig this spring, it is certainly having a positive effect.

Unfortunately, some estates are not so quick to come on board due to the mindset of Residents Associations’ Committee members. It is a work in progress and we are gaining traction primarily as a result of Ballincollig Tidy Towns weekly Newsletter that appears on our website (www.ballincolligtidytowns.ie) 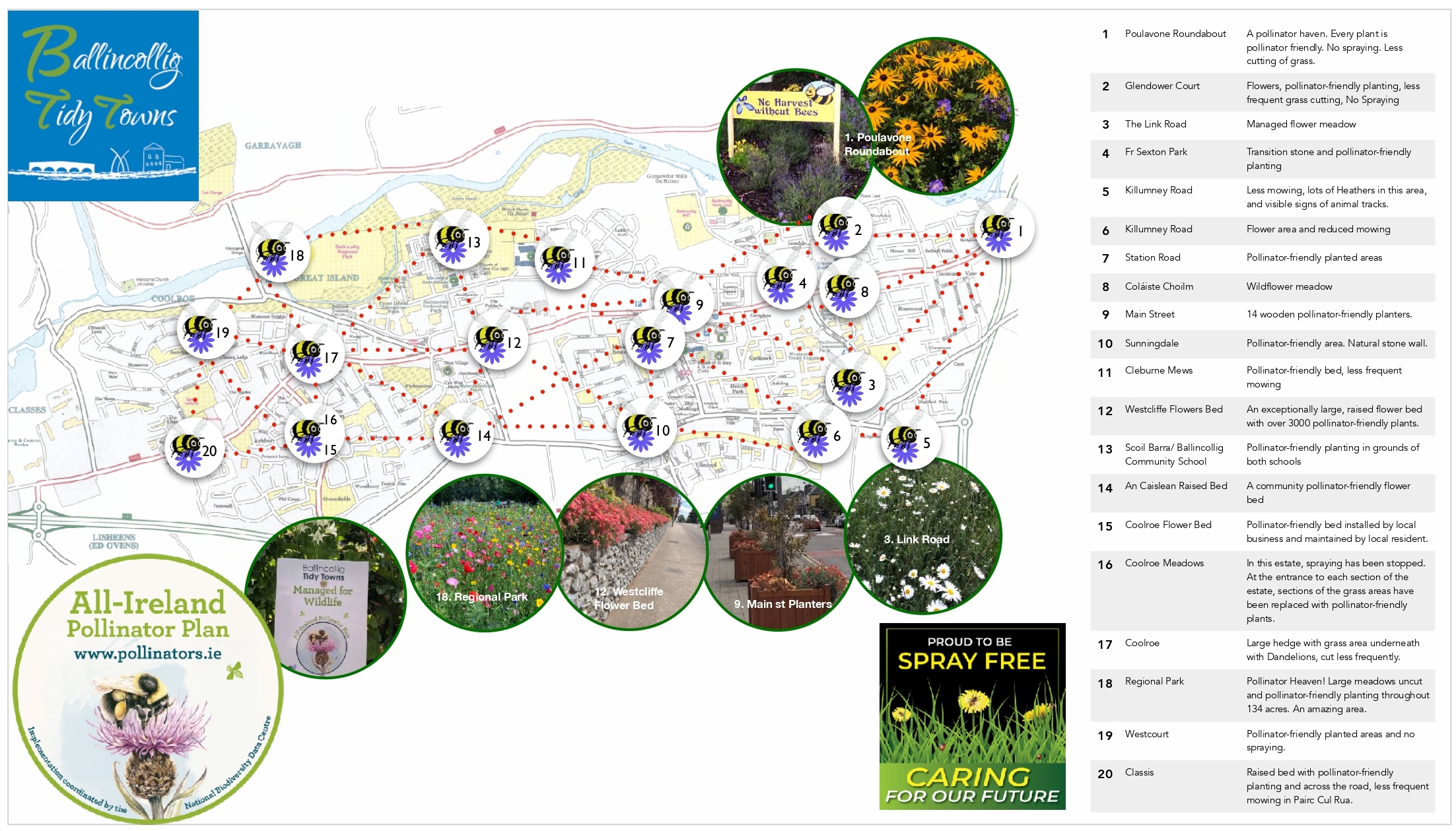 The Pollinator Corridor stretches from Poulavone Roundabout right through Ballincollig to Classis and also includes the Regional Park.

All along the route there are numerous areas for bees to feed. Estates, Schools, Managed Planted Areas, Businesses, Homes and of course the 134-acre Regional Park. There has been a noticeable increase in the numbers of bees in Ballincollig.

This year we have been encouraging people to ‘Pledge their Gardens for Pollinators (https://pollinators.ie/gardens/) and our newsletter and website regularly feature articles from the All-Ireland Pollinator Plan.