To introduce myself, my name is Alan Poole, formerly an ecologist and now an intensive dairy farmer from Gorey Co. Wexford. Also, on my team are, my wife Cheryl and 3 children. Last winter while doing some mundane job on the farm I was listening to the Teagasc Signpost Podcast on my headphones and the topic was the All-Ireland Pollinator Plan. After listening to the podcast, I thought our dairy discussion group should get involved with the plan and so when we held our AGM I submitted it as a potential topic. Alas, it never got mentioned, my bubble was burst. But the next day our facilitator, Colm rang me and said he thought the topic was bigger than our discussion group and we should investigate it further. 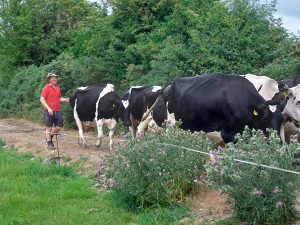 Bringing the cows in for milking.

We got in touch with Ruth Wilson, the Farmland Officer for the All-Ireland Pollinator Plan (funded by the Dept of Agriculture, Food and Marine) and she agreed to come visit my farm and see what we could do. I must admit, I was nervous when she arrived that there would be lots of tutting as she toured an intensive dairy farm. Thankfully, this wasn’t the case, as she was impressed by the mature hedgerows and the spaces we leave for biodiversity on our farm.  We agreed that we would host a farm walk to show what could be done for biodiversity and pollinators on an intensive farm.

At the same time, I was approached by Dr Michelle Larkin in the National Biodiversity Data Centre and asked if my farm could be included as one of the farmland sites in the National Pollinator Monitoring Scheme that is being set up in 2022. I agreed to that as well, and since the end of April, Kyle Kenny has been conducting a monthly survey of the pollinators on the farm.

As the summer rolled on, I kept Ruth up to date with developments on the farm.  While out working I would see another plant in bloom, or a bee would catch my eye and I’d spend a few minutes trying to get a good photo for Ruth.  It was amazing the difference it made to be conscious of pollinators and watching to see them and being considerate of them. Just little things like resisting the urge to get the slash hook to deal with thistles by the electric fence. A little tolerance was gratefully rewarded by the appearance of lots of bees. Eventually we set a date of the 20th of July for a farm biodiversity walk. In total, we ended up with 9 different stands;

The day before, we started getting set up, making sure we had a table each for all our contributors. Colm, my Teagasc advisor arrived to help and he also had a bunch of boards from previous walks, some going back a good few years. It’s amazing how the same messages are still 100% relevant, today. We just need to put it all into practice.  We weren’t sure how many would turn up on the night, although feedback from friends and social media was very positive. On the night we ended up with about 130 individuals including children, with a mix of farmers and non-farmers as both were equally welcome. There was a great level of interaction at all the stands as the audience listened and then raised questions on a topic. 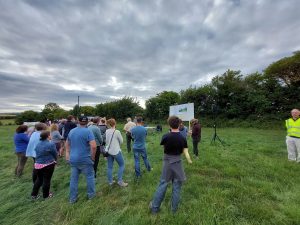 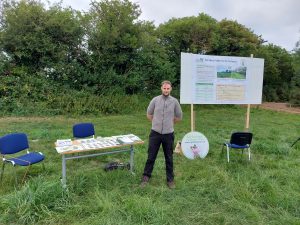 It was a very positive evening. Ruth spoke about the value of native hedgerows and their management on the farm. Kyle spoke about how the survey had found some lovely wild bee species, including: 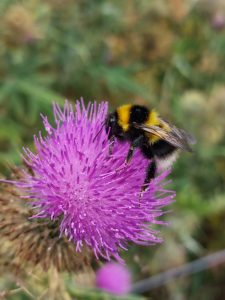 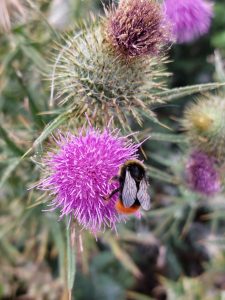 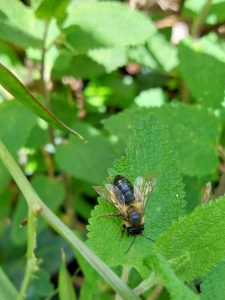 Some of the beautiful pollinators found on my farm

They have lovingly christened a section of my cow road as “Thistle Lane”.  Equally encouraging was the fact that 40 farmers who attended said they would be interested in partaking in a “Environmental Discussion Group”. Now, as I continue my work on the farm, I ask myself what I can do differently or better to help biodiversity. There is so much potential to be realised by making small changes. It’s amazing the importance of a simple thing like hedgerows, as it turned out, they were the common denominator between all the groups that attended on the evening. 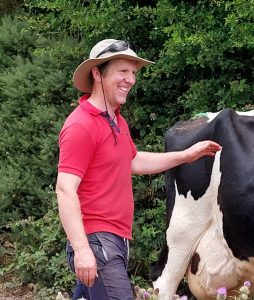 Working with all sectors on the island of Ireland to create a landscape where pollinators can survive and thrive. Implementation coordinated by @BioDataCentre

You might still see some bumblebee queens fattening up for hibernation. Last November, queens were spotted on Ivy, Mahonia, Comfrey and Hebe.

If you spot any you can identify, let us know, along with the plant it was feeding on, here: https://bit.ly/2u6yMgm

Where do our pollinators go in the winter?

Where do our pollinators go in winter?

Thinking about a gift for the nature lover in your life?

You might be surprised to hear that wildflower seed
mixes and seed ball type products can be detrimental to local biodiversity.

Do you know some Hoverfly larvae hibernate in 🍂 leaf litter?

The Hoverfly larvae below @GeoffWilkinso19 mostly feed on aphids. So they're really important for natural pest control and pollination 👌