I was one of those lucky few people who was quite happy when they heard that there was going to be a lockdown at the end of March 2020. Living in a fairly remote area and, as the saying goes, ‘being comfortable in my own skin’, it afforded me an excuse to stay at home and explore my immediate surroundings to a greater degree.

For many years I worked as a stone mason and it always amazed me how quickly plants would establish themselves within the crevices on the many stone walls I had built. I was especially aware of this from observations in my own garden. We had embraced that philosophy with regard to the garden itself which we’d let go ‘wild’ (having sold our lawnmower years previously), and felt it would be better to let wildflowers develop by themselves in the grass and hedgerows that made up our surroundings rather than try and introduce anything in the way of a wildflower seed mix. By the way, my wife, Ann, did a wildflower count at one stage during the year and found 72 species that had colonised our abode.

But going back to April 2020, initially I was captivated by the larger more obvious insects I was seeing, namely bumblebees, of which we had several species visiting our wilderness, some of which were completely new to me, I was particularly fascinated by the cuckoo bees that were regular visitors. This led in turn to me noticing lots of smaller bee and wasp-like insects, nearly all of which were new to me. This was round about the time I started sending some of the many photographs I was taking of these solitary bees to Una FitzPatrick in the hope she might help me with ID. She has shown endless patience with me over the year, but I have been trying to spare her since I discovered a very useful online Facebook page ‘Insects and invertebrates of Ireland’ who have been invaluable in helping me identify some of the invertebrates I couldn’t find in any of my book guides.

As the spring continued, I began to be aware of the colourful hoverflies that seemed to like the flowers of the ground elder in particular. This was a group of insects which had always completely intimidated me to try and get to terms with, both trying to photograph and then identify. Luckily I knew Paul Walsh and Mary Duggan had great experience with these species so I started sending them photographs via WhatsApp to help me get started (they too showed great patience and encouragement with me). Paul advised on a good guidebook and also put me into contact with a Facebook page: UK hoverflies, and the people on this page are so knowledgeable, patient, kind and courteous that I became totally hooked on trying to catalogue what species I could find in my own garden.  I kept my explorations to a relatively small area in the garden and followed the places the sun was shining on as it passed overhead. (It got to the stage to where I almost hoped it would be a rainy day so that I wouldn’t spend too much time just wandering around the garden looking for a new species….almost). 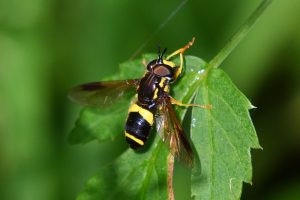 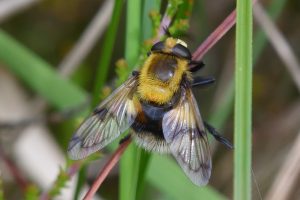 For a while I wasn’t even sure what species of fly were hoverflies as they seemed to mimic so many other different insects. Some did very good impressions of honeybees (many in the eristalis family) and others attempted to mimic bumblebees, with varying degrees of success! The Volucella bombylans even expands this mimickry by having two forms one of which mimics the white tailed bumble bee and the other a red-tailed bumble bee. As if it wasn’t difficult enough for a complete novice, to have great variety within a species seemed to be very unsporting! 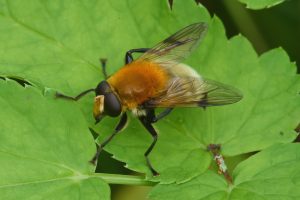 Eventually as the year progressed, ‘the list’ expanded ever more and I ended up with 45 hoverflies identified to species level and a lot more that could not be fully identified from photographs alone. I’ve been looking forward since the last insects disappeared in the autumn for the start of this year’s ‘season’.

As the spring of 2021 has slowly staggered towards the summer I’ve been trying to recall the characteristics of at least some of the previous year’s species with a modicum of success, but I’ve already found three new species to add to my ‘list’.

I’m not sure if I’m hoping for a hot, dry summer or not, I’m certain there must be other things I should be doing in the garden?

Andrew’s species list for Hoverflies spotted in his garden over the last 12 months: