The Local Authority Pollinator Award aims to encourage Tidy Towns groups to implement pollinator-friendly actions in their towns and villages as part of the Tidy Towns competition. It supports the All-Ireland Pollinator Plan and is coordinated and sponsored by the Heritage Offices and Biodiversity Offices of Local Authorities across Ireland, in partnership with the National Biodiversity Data Centre. In addition to the overall winner, it identifies large and small town winners within each of the four Tidy Towns regions. Since 2021, we have also introduced an award for the best newcomer.

Bees are our most important insect pollinators, but unfortunately one third of our 99 wild bee species are threatened with extinction. As our landscapes have become more intensively managed and our roadside verges, parks and gardens more manicured, we have reduced the number of pollen and nectar-rich wildflowers our pollinators have access to. The Pollinator Award rewards communities who are allowing space for nature, reducing mowing to allow wildflowers to naturally grow, reducing herbicide use and providing safe areas for pollinators to nest. 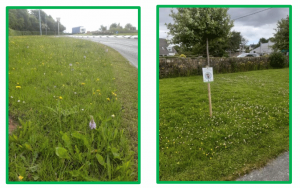 Congratulations to Buncrana, who won the national Pollinator Award at the Tidy Towns awards on 12th November, recognising all that has been done by the town to help pollinating insects. Having also won a regional Pollinator Award in 2017 and 2018, and taking the top prize in 2019, Buncrana continues to excel in this competition and this year proudly recaptured the top award for most pollinator-friendly town in Ireland.

The Tidy Towns committee in Buncrana have made a determined long-term commitment to help pollinators, managing their town’s public spaces in a pollinator-friendly way, protecting existing native hedgerows as well as planting new native hedgerows, a pollinator-friendly orchard; reducing mowing to allow wildflowers to grow; and by planting pollen-rich flowers. They have also done a huge amount to create awareness of biodiversity and of the importance of pollinators by working with the local schools, and through a local garden competition. 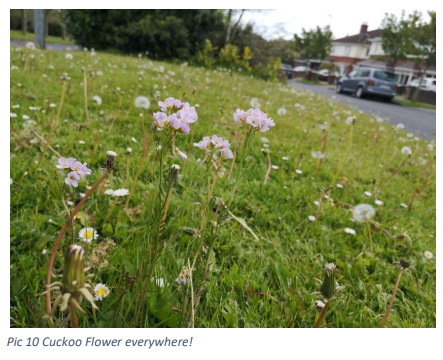 Woodstown Village Residents Association submitted an inspirational first time application to the award. Crucially, they recognised those existing habitats that are important for pollinators and prioritised protection of those. These included a semi-natural meadow on a hill-site of approximately one hectare, flowering hedgerows, and a wilderness area. They also demonstrated impressive actions around reduced mowing. One resident even created two low-mow spirals at the entrance to Woodstown. The Association also ran a ‘Pledge your garden for pollinators’ campaign and offered free perennial pollinator plants to all residents who signed up.

Congratulations to all 8 of the regional award winners. Each of these applications was excellent and demonstrated a very wide range of pollinator actions to make their local area genuinely biodiversity friendly.

Since the award’s inception in 2016, there have been almost 200 entries from towns and villages across the country. According to feedback from Tidy Towns judges, over 80% of the general Tidy Towns entrants are also following pollinator-friendly guidelines produced as part of the plan, even if they aren’t entering the Pollinator Award. Every year, the standard of entries is growing and the committee behind the award continue to be inspired by what is being achieved. We were specially delighted with the number of entries we had this year (76 in total), and the fact that 55% of the entries were from new entrants.

On behalf of the LA Pollinator Award committee, we thank the Tidy Towns Unit for the opportunity to promote the work of the Local Authority Heritage Officers & Biodiversity Officers and the National Biodiversity Data Centre in supporting pollinators. The Tidy Towns programme has been very successful at promoting the message to local communities and encouraging positive actions to save our pollinators.

Dr Úna FitzPatrick, Chair and Project Manager of the All-Ireland Pollinator Plan said: “It’s amazing to see what Tidy Towns groups are doing for biodiversity. We hope this will continue long into the future. It is these local community groups who are leading the way and showing us what can be done to help biodiversity and help tackle the climate crisis at the same time. With so much of our landscape being intensively managed and one third of our bee species at risk of extinction, these towns and villages, where they are protecting their flowering hedgerows, planting wildlife-friendly trees, eliminating pesticide use, and reducing grass-cutting, act as much-needed safe refuges for biodiversity across the landscape.”